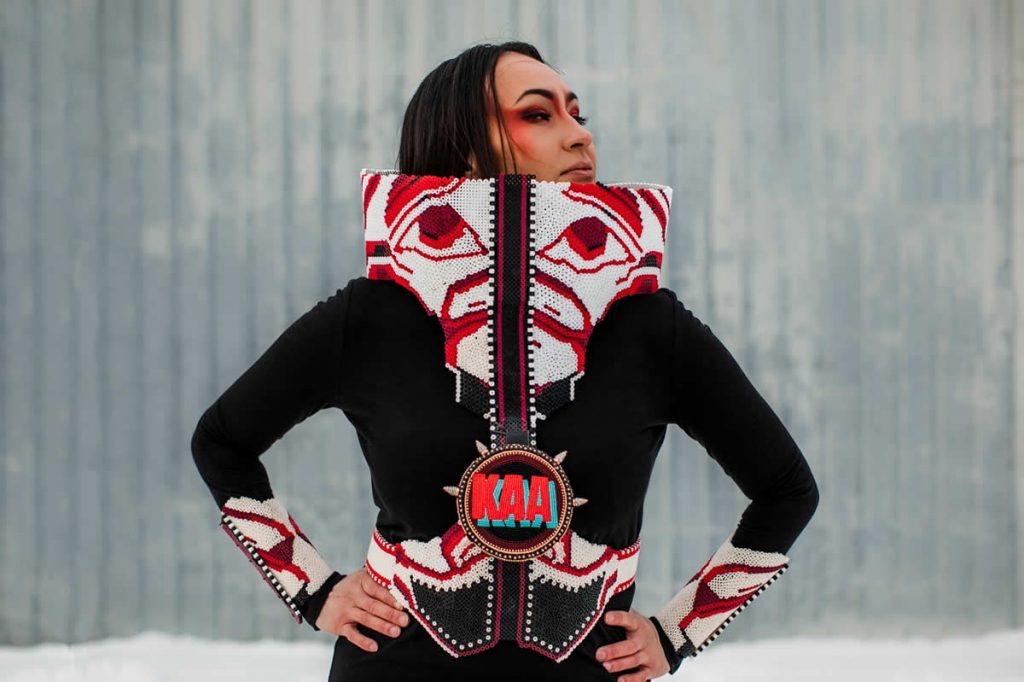 New Age Warriors is a celebration of the strength, resilience, and ingenuity of Catherine’s ancestors and the women in her life today. The primary inspiration of Catherine’s artwork is her grandmother. Growing up, Catherine’s knowledge and memory of culture was informed as she observed her grandmother create traditional moose hide wear with detailed beadwork. In Armour, Ms. Chief of Change, Catherine honours her grandmother’s memory by incorporating her portrait on the blanket-inspired garment, adorned with the geometric patterns that are found in her grandmother’s work. Not only does this particular piece illustrate the immense strength of matriarchy in the family culture, but it highlights beading as a thread to connect generations of family members and artists. 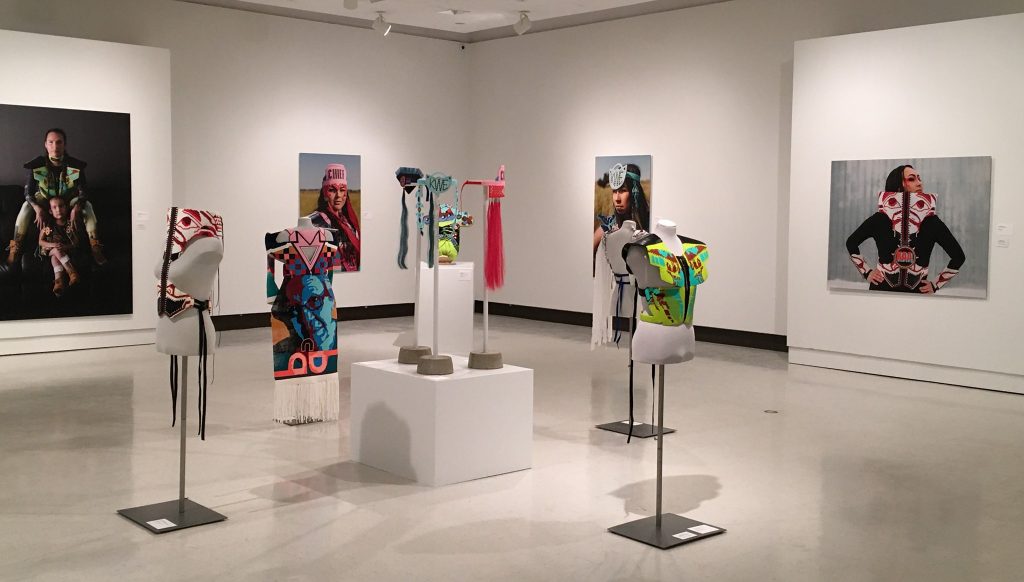 Connection is also present by Catherine’s collaborations with contemporary Indigenous designers. When the garments in New Age Warriors were shown at the first ever Toronto Indigenous Fashion Week in June 2018, clothing and accessories created by others were incorporated in her runway designs. This promoted inclusiveness, emphasized diversity, and embodied the belief that by working together, people are stronger. Ultimately, the voices of memory, the recognition of personal narratives, and the combination of tradition with a futuristic outlook come together to form New Age Warriors. This exhibition encourages us to remember the past, to be active on the path towards reconciliation, and to celebrate the immense amount of love that binds community.

Catherine Blackburn melds traditional form with contemporary design in New Age Warriors, using the framework of beading to explore cultural identity, memory, and history. As a jeweler and visual artist, Catherine has worked in painting, quilling, and beading to address Canada’s colonial past through her personal experiences. An exploration of new media and directions in her practice, Catherine has fashioned warrior garments and language medallions from plastic Perler beads in New Age Warriors to show the connection between materiality and Indigenous women’s ability to adapt to their changing environments. Each outfit is an amalgamation of elements in female clothing from different North American nations, honouring the diversity and innovation of traditional Indigenous design.

Catherine further emphasizes matriarchy within the series Identity Links. Asserting the importance of language characterizes much of the work in Catherine’s practice, and this continues in New Age Warriors. For example, the terms “mother” and “my mother” are beaded in Cree syllabics (on both the cradleboard and medallion, in a graffiti style) and Dene syllabics, respectively, in addition to universal sign language. These pieces underscore identity of the mother within Indigenous culture and of the women that inspired Catherine to create this body of work. The incorporation of words also reminds us that loss of language through colonialism has been destructive to First Nations throughout Canada. Language gives power and meaning, just as women have created environments of love and support in Indigenous heritage.

The regalia in New Age Warriors is made of plastic Perler beads, speaking to the ingenuity of Indigenous women. Throughout harsh colonial history and its harmful present-day effects, the plasticity of the garments parallels the flexibility of Indigenous women, while simultaneously affirming their resiliency. Catherine has molded, bent, and shaped the plastic, conforming the tough material to her designs. Similarly, Indigenous women were forced to adapt in environments to which they were unfamiliar. In this light, Catherine’s armour is not only warrior gear, but the outfits act as a shell to protect women and those around them.

Catherine Blackburn was born in Île-à-la-Crosse SK. She is of Dene and European ancestry and is a member of the English River First Nation. Her work in beading, painting, and jewelry address Canada’s colonial past, prompted by personal narratives. Through the subject of family, she is inspired to express her own feelings and experiences that speak to the complexities of memory, history, and identity. Her art merges contemporary concepts with elements of traditional Dene culture that create dialogue between traditional art forms and new interpretations of them. She has been included in notable exhibitions such as Beadspeak (2016) at Slate Fine Art Gallery, Regina; Worlds on a String: Beads, Journeys, Inspirations (2016) at the Textile Museum of Canada, Toronto; the renowned 2017 Bonavista Biennale, as one of only 26 Canadian artists; and ‘My Sister,’ the Contemporary Indigenous Art Biennial 2018/La Biennale d’Art Contemporain Autochtone (BACA) in Montreal, Quebec. She has received numerous grants and awards for her work, including a Governor General History Award, the highly recognized Elizabeth Greenshields Foundation grant, and most recently the Saskatchewan RBC Emerging Artist Award. She is affiliated with the Alcheringa Gallery in Victoria BC; the Mann Art Gallery in Prince Albert SK., Slate Gallery in Regina, SK.; the B.Yellowtail collective in Los Angeles, California; the Art Gallery of Ontario in Toronto ON; and the Remai Modern in Saskatoon SK.

Catherine wishes to say Mahsi Cho, thank you, to the following artists and designers for their collaborative involvement of New Age Warriors: Tenille Campbell of Sweetmoon Photography, Melanie Parsons, Alano Edzerza, Liss Stender, Tessa Sayers, Razvan Anton, Mélanie LeBlanc, Kacey Beaudry, Natashia Gagnon, and Red Works Photography. We would also like to gratefully acknowledge the support of Catherine’s family and friends whose contributions and support are key components in this project’s fruition.

We gratefully acknowledge our funders, including Diane & Roger Mann of Mann Motor Products (Prince Albert), Canada Council for the Arts, the Department of Canadian Heritage, the Saskatchewan Arts Board, SaskCulture, Saskatchewan Lotteries, and the Cities of Prince Albert, Moose Jaw, Swift Current, and North Battleford. Additional support is provided by Adventure Destinations International.